The vision of reestablishing an American Prairie began to take shape with a 1999 report by The Nature Conservancy, Ecoregional Planning in the Northern Great Plains Steppe. The report identified critical areas of the Northern Great Plains that warranted protection, including the area north of the Charles M. Russell National Wildlife Refuge and the Upper Missouri National Wild and Scenic River, which would soon be surrounded by the Upper Missouri Breaks National Monument.

Not long after, the World Wildlife Fund focused on this region of the Montana Glaciated Plains as a prime location for large-scale conservation, not only because of the existing national river and national wildlife refuge but because much of the surrounding lands remained largely undisturbed. In many places, the Northern Great Plains has never been plowed, with native short and mixed grass still in place. In 2001, conservationists and philanthropists formed the Prairie Foundation as an independent, non-profit organization, with later name changes to the American Prairie Foundation, and now the American Prairie Reserve.

Wanting to visit the APR, Sondra and I head north on Highway 191 out of Lewistown. Turning left at a junction called “Bohemian Corner,” we enter the Charles M. Russell National Wildlife Refuge and cross the Missouri River. Leaving the river corridor, we’re now in ranchland under the dome of Big Sky. At a junction called “DY,” we turn right onto gravel road and follow the directions provided by the American Prairie Reserve through several turns, finally entering APR’s Sun Prairie Unit.

We first stop to have a look at the one-room Prairie Union School, a small log structure built in 1912 that originally served a family homestead. In 1943, the school was moved to a nearby ranch where it offered classes for grades 1-8 and served as a community center. Then in 1948, it was moved to the current location where it continued to operate until 1957. The APR has since renovated the school as a remembrance of education during the pioneering years on the Great Plains.

Past the Reserve’s Buffalo Campground, we stop at a large prairie dog town, with several small heads emerging from holes in the ground.

Beyond the prairie dog town, we continue into the heart of the prairie that stretches into the contiguous Russell NWR to the south. This is real prairie, undulating grasslands that reach to a relentless horizon.

Prairie ecology is big—expansive grasslands are needed to restore habitat for bison, pronghorn, bighorn sheep, elk, mule deer, perhaps grizzly bear, wolf, and mountain lion. Even now, grizzlies have begun filtering out of the Northern Continental Divide Ecosystem centered on Glacier National Park with its 1,000-plus grizzly population, some heading east onto the Northern Great Plains in Montana.

In 2004, the Northern Plains Conservation Network, a collaboration of non-profit and tribal organizations working to preserve the plains, released a report, Ocean of Grass, that assessed the conservation potential of the Northern Great Plains. The report cites studies that suggested “Areas as large as 3.2 million acres (5,000 sq mi/12,500 sq km) … as necessary to sustain wild bison on ecologically meaningful scales.” While bison might be restored on say 500,000 acres, the long-term “minimum dynamic area” could be as much as four times that acreage to prevent overgrazing. And then to have enough bison to support predators, add another million acres, plus a little more to sustain the herds in case of long-term drought.

As a result, APR’s goal is to reestablish a reserve of 3.2 million acres. The process is to purchase land and associated grazing leases on public land to assemble the prairie. The leasing of public land originates with the Taylor Grazing Act of 1934, which was intended to control overgrazing of the land. Grazing districts were created that were treated like open range, with each rancher having a right to graze a set number of cattle across the whole district. This allowed the cattle to roam, naturally avoiding areas where there was little grass and preventing overgrazing. However, by the 1950s, with the influence of the ranching lobby, the open range districts morphed into individual plots of thousands of acres, fenced with taxpayer money, and each leased by a single rancher. These leases were attached to the land a rancher owned so that when a ranch is sold, the leases go with it. What had become an obstacle to public oversight of public lands, with little control of grazing, now also became an advantage for those with restoration in mind if one had the resources to buy a ranch with its leased acres.

In 2004, the APR began purchasing land from willing sellers as ranchers faced the reality of harsh winters, drought-stricken summers, and younger generations moving away to better opportunities. As Richard Manning says in his article, “Prairie Crossroads,” published in OnEarth, “The Missouri Breaks area is headed for restoration, almost with a will of its own. Ever since the days of the cattlemen, it has pushed people and their plans away.” The population of the area peaked around 1918 and has been dwindling ever since.

In 2019, the APR has purchased 104,244 acres with 315,047 acres of associated leased public land, totaling almost 420,000 acres where wildlife populations can be rehabilitated. Genetically pure bison (with no detectable cow genes) have been reintroduced on APR land with the herd growing to about a thousand. The first introductions were from Wind Cave National Park in South Dakota, while the more recent introductions were from Elk Island National Park in Alberta at the northern reaches of the Great Plains.

The American Prairie Reserve has been approved to graze bison rather than cattle on two Bureau of Land Management allotments and two Montana State leases. Negotiations are underway with the BLM to permit bison to graze on other APR leased land.

While the purchased and leased land at present appear fragmented, the objective is to compile a conjoined whole, acquiring the missing puzzle pieces as they become available. For example, in 2019, the APR purchased the Blue Ridge ranch that includes 9,695 deeded acres and 4,427 leased acres. This was a crucial acquisition for the APR, not only because the Blue Ridge contains resident elk, bighorn, mule deer, pronghorn, and prairie dogs, but also because the ranch is contiguous with the APR’s Burnt Lodge Unit, which in turn borders the Russell NWR. With barriers removed, wildlife have free passage across Blue Ridge, Burnt Lodge, and the NWR.

The Nature Conservancy also has a presence on the Great Plains, having protected more than 300,000 acres of short-grass prairie. On the Northern Great Plains, very near the American Prairie Reserve, the Conservancy’s 60,000-acre Matador Ranch serves as a model for conservation within working ranchland. Conservancy-owned since 2000, the ranch operates as a “grass bank” to preserve traditional open range but also to maintain the prairie ecosystem. The Conservancy leases grazing acreage to surrounding ranches in exchange for the ranchers preserving and improving prairie on their land, especially a commitment to never “bust” the sod. The short-grass prairie can withstand sweeping fires and tromping cattle herds, but it cannot survive being plowed under. In addition, ranchers get a discount on the leases if they preserve specific wildlife habitat on their ranches; say, a sage grouse lek or a prairie dog colony.

Other conservation organizations are working across the Northern Great Plains to preserve remnant prairies. For example, the Northern Prairies Land Trust, working mostly in South Dakota and Nebraska, played a major role in a land exchange that added 30,000 grassland acres of bison range to Badlands National Park and works in both states to enable landowners to preserve their lands through conservation easements.

Gazing across the APR, I’m reminded of A. B. Guthrie, Jr.’s descriptions of prairie in his novel The Big Sky. From the top of a hill, the novel’s central character, Boone Caudill, “could see forever and ever, nearly any way he looked.”

Between mountains and the Missouri was high, bare country, where a man on a rise saw buttes swimming in the distance and the distance itself rolling off so far that he lost himself looking into it. … mile on mile of plains dipping away and meeting up with the sky at the edge of the world.

On our visit to APR, we see a couple of burrowing owls (Athene cunicularia). 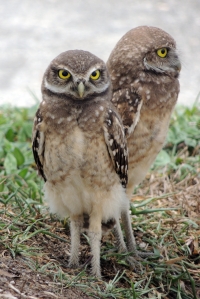 Small owls with relatively long legs, they stand on prairie dog mounds like sentinels. The owls live in the prairie dog burrows but are out and about during the day in contrast to other owl species that are mostly nocturnal. Burrowing owls feed mainly on insects and small rodents like mice, and are generally good neighbors, only rarely feeding on prairie dogs.

An animal that does prey on prairie dogs is the black-footed ferret (Mustela nigripes), whose diet is about 90% dogs.

The black-footed ferret is one of the most endangered mammals in North America with now only about 500 found in the wild. They were twice thought to be extinct. First in the 1950s, but then a small group was discovered in 1964 that died out during the next decade. A group of about 100 was then discovered in 1981 in Wyoming. With this source population, reintroduction programs are bringing the ferret back to the Northern Great Plains and in the region of the APR in Montana, including at the UL Bend National Wildlife Refuge within the Charles M. Russell NWR. However, UL Bend does not have sufficient prairie dogs to support the ferrets. APR’s strategy for restoration of the ferret is to improve and increase prairie dog colonies to connect with the refuge, anticipating that the ferret population will then expand onto the American Prairie.

Another of the creatures to be reintroduced is the diminutive swift fox (Vulpes velox), only about the size of a domestic cat.

Because of habitat loss and poisoning meant for larger predators, the swift fox was considered extinct in Montana by 1969. Reintroduction efforts have brought back a small population. The APR plans on requesting permission to reintroduce swift foxes on APR lands from Montana Fish, Wildlife & Parks, which has jurisdiction over such reintroductions.

The American Prairie also has a resident population of greater sage grouse, an indicator species for the health of the sagebrush steppe ecosystem.

The Northern Great Plains, in Montana and Wyoming, hosts the northeast quadrant of the grouse’s home range. A little smaller than a wild turkey, the greater sage grouse once numbered in the millions, but the population is now down to about half a million scattered across eleven western states. Each spring, the males perform an elaborate mating ritual in which they billow huge air sacs to attract a female. These mating competitions occur on leks, patches of ground to which the grouse return every spring. The grouse need undisturbed sagebrush for food and shelter; however, overgrazing by cattle has reduced native grasses, allowing non-native grasses to invade, which are more prone to fire that sweeps across the sagebrush plains. Roads, subdivisions, and energy production have all contributed to fragmenting the sagebrush steppe.